Talk by Raymond Sala on 12 August 2020 in Lamanere 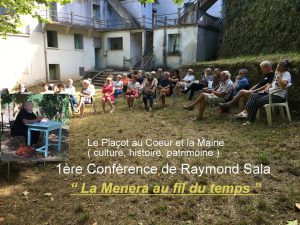 This talk is dedicated to Marie Cabanas-Laïlle

At the start of his presentation, Raymond Sala paid tribute to his professor and thesis director Mr. Pierre Chaunu, eminent historian, as well as to local historians: Marie-Cabanas Laïlle and Roland Serres-Bria.

Some dates and demographics

Established in the 10th century, the places known as Lamanère, Labadie, Serralongue and Le Grau were grouped together in a single community. It should be noted that Lamanere was located at the end of an important communication axis toward the Ripollès, ranging from the bridge of the Virgin Mary to the Col de Malrems on the current border.

The community of Serralongue was created in 988, the Cabrens castle is mentioned in the eleventh century. Dedicated to Saint Savior, the Church of Lamanere was consecrated in 1378, Saint Christine in 1255, and the Hospital for the Poor of Jesus Christ in 1396 (on the site of the Suñé house). The Mas de la Sadella, Les Estanouses and Pla del Boix are very old (the oldest is that of La Sadella, mentioned in 1323).

In 1370, the first population census took place; Serralongue and its annexes had 50 hearths and Saint-Laurent 42. The population collapsed at the end of the 14th century because of the black plague and the violent excesses committed in 1417 by Baron Gérard de Rocaberti.

Turbulent periods in the history of Lamanere

Because of its involvement in the Salt War, Lamanere was for a long time considered a rebel village: 40 houses were burnt down in the “bastion” of the Angelets de la Terra.

In the 18th and 19th centuries, the Haut Vallespir region was a place of smuggling, in connection with the smugglers’ societies created in Banyuls-sur-Mer, partly by local elected officials. Also noteworthy is the 40-man smuggling company of the three Coste brothers, one of whom, Jean, was mayor of Lamanere. It was a large-scale smuggling operation, involving livestock, tobacco, gunpowder, matches, brandy, Catalan shoes (espadrilles) and coins.

In the 19th century (under Louis-Philippe), there were three borders: the official one on the mountain crest, with two opposite borders on either side, to the north on the right bank of the Tech and to the south on the left bank of the Fluvia, where the Spanish authorities asked for a passport. The Upper Vallespir to the Albères had become a lawless zone, “a wild frontier”.

Like all the other neighbouring villages, Lamanere was, in this period, a place of refuge for bandits, smugglers, deserters and Carlists. At that time, the Haut Vallespir supported the Carlists. Jean Llobère and Jean Juanole, from Lamanere had joined the Association of the Malfaiteurs de Saint Laurent de Cerdans (1834-1839) which recruited in the Carlist market quarter. More famous, the Trabucaires of 1844-1846 were supported by the whole population. The presbytery itself in Lamanere was a Carlist lair, just like the houses and farmhouses.

Some anecdotes about religion in Lamanere

In 1833, the priest prohibited the sheep from coming to Christmas mass because the mayor and the teacher had decked them out with tricolor flags. Anti-clericalism gained importance at the end of the 19th century, despite the persistence of a religious spirit in the village.

In 1906, the mayor sounded the bell for a civil burial in Serralongue. In Lamanere, the teacher, “apostle of socialism and free thought”, organized a conference and opposed the visit of the bishop.

In 1894, the roof of the Church collapsed on the night of the arrival of the new parish priest Jules Pujol. It must be said that the building had been looted and devastated (1793-1813), badly repaired and insufficiently enlarged in 1827. The presbytery issue was not settled until 1911 through a rental with a 9-year lease

The priests watched over their flocks and were not complacent: from the 16th to the 19th century, they lectured their parishioners on the abuse of absinthe during meetings at ND du Coral, condemned fighting during gatherings, dishonest games, dances, cohabitation without marriage and bigamy.

In 1839, the women refused to obey the parish priest who wanted to impose the wearing of hoods that would cover them from head to waist.

Let’s not believe that the inhabitants of Lamanere were all smugglers and Trabucaires; they also have a deserved reputation for hard work. On an individual level, we can give as an example Damien Juanole, who died in 1836 in Serralongue. An inhabitant of Lamanere in 1786, he was successively a weaver, clerk, town clerk, teacher and justice of the peace of the canton.

According to its toponym, Lamanere has long been known for its mining wealth: gold, silver, lead, copper and zinc. In the 19th century, Lamanere experienced intense prospecting and exploitation of its mines, the last of which closed in 1933. A century earlier, in 1838, a Parisian company was authorised to prospect through an ordinance from Louis Philippe I. Coal was searched for at La Sadella and around Sainte Christine. In 1891, Joseph Coste found copper at the Pla de la Guilla on the Fabre family’s property. All the concessions then passed to this family. In 1910, the widow Fabre entrusted these concessions to a company from Marseille and passed them on to the Viscountess de Thoisy, part of the large Boluix family of the Roussillon. It was the latter who renounced the concessions in 1932-33 and donated premises to the sisters of Saint Vincent de Paul (the Plaçot!). The lintel with its initials and dates requires a study.

Note the important and well documented work of the historian Catherine Verna, who notably presented Arles-sur-Tech as “a small Ruhr”, in connection with the mines of Batère (14th and 15th centuries).

The sandal industry in Lamanere

Regarding the sandal industry created in Saint Laurent de Cerdans, Michel Xatard, a craftsman, appears as Lamanere’s first pioneer. Note the installation of the factory of the Coste brothers, which in 1892 had 25 espadrilleurs and 15 stitchers. As in Saint Laurent, the use of the llibreta was practiced there: llibreta del treball for wages and llibreta de la botiga for purchases at the owner’s grocery store. A kind of barter to the advantage of the latter: work for food. At the end of 1921, the Union Ouvrière [Workers Union] cooperative was created by eight workers, independent of the Coste factory. The Union had 40 shareholders in 1931. (See the work by Marie Cabanas and the recent book by Jean-Marie Rosenstein on the espadrille industry in Haut Vallespir. The latter lists 12 companies in Lamanere.) It should be noted that at that time, Juanola Mercédès, originally from Bassegoda, had created her own sandal production company, according to Rosenstein. As in Saint Laurent, the collapse of the sandal industry came in the 1970s.

Among the traditional values of the people of Lamanere, we can highlight the practice of hospitality on a daily and even post-mortem basis. At funerals, alms were given from hand to hand at the door of the church, cemetery or at homes with bread, usually for the poor. Some families, after and at home, offered refreshments [refresc] to all those who had attended the funeral.

In many cases a funeral banquet was held, a practice generally observed until the first half of the twentieth century and infrequently beyond. Abdon Tubert of the Pla del Boix, who died in 1982, may have made headlines: general charity for the poor, 90 guests spread around two tables served bread, wine and vegetable soup. A table was set up in the middle of the square for 80 farmers (sharecroppers and small property owners). More than 100 guests (family and friends) were invited to the Pla del Boix where 16 employees served: a quarter of beef, 6 sheep, 295 liters of wine and a load of wheat and rye.

But hospitality also goes hand in hand with fraternity. Fraternity in the fighting during the Salt War against the gabelle (1663-1672), fraternity in the workplace: “smuggling”, agriculture, forestry and mining, the sandal industry … fraternity in disasters: the Retirada, the 1940 flood, the wars of the 20th century … It is no coincidence that the Secours Mutuel society [mutual aid society] was called La Fraternelle in the 19th century.

NB: It is important to remember that the following notes were written by the inhabitants of Lamanère, who provide us with elements that complement this presentation and are interesting in more ways than one, on the historical level of our village:

They lived near Marie-Andrée’s (Margalef Editor’s note) and made espadrilles on their own. They have two sons, one of whom is Claude Juanole who lives in Le Puy, of the age of Robert Matillo.

We have deduced that and believe it is indeed her that we are talking about, she had the same name as her husband when she married him, it is a coincidence. They called her Marcelle and not Mercédès.

In Can Bottes, a house which is located after the wastewater treatment plant on the way to the Coral, there was also a Juanole family whose son is called Roger, he has two children, Roland and another in his forties, they also had a sandal business but we don’t think we are talking about them because they are Juanoles. “

This translation was generously given to us by Jed Rosenstein.